When Your Child is Refusing to Do What She is Capable of Doing: Skill vs. Will 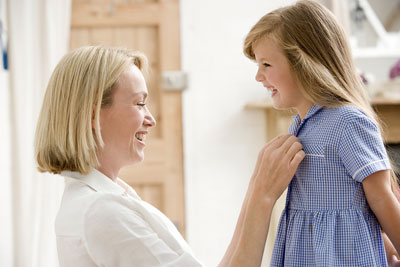 Typically five-year-old Andrew bounced out of bed in the morning, dressed and was ready for breakfast 15 minutes later, but on this morning when his mom greeted him with “Hey Buddy, how are you doing?”  He lost it, shrieking, “Don’t talk to me!  I hate you.”  Of course not two minutes later he was begging her to help him dress.  Not only did she not have time, since she normally didn’t need to assist him, but quite frankly she didn’t feel much like helping him out after he’d been calling her names.  Yet she knew if she ignored him and insisted he dress himself, since he was perfectly capable of doing so, things would only get worse.  But when she attempted to help him, his body went lax, making it impossible to get his pants on.  And when she had a go at wrestling him into them, he kicked her.

Being cooperative and successful is a combination of having the skill and having the will.

Since Andrew has dressed himself in the past and usually does so with little to no prompting when he “can’t dress himself” it’s pretty obvious he’s lacking the will. The question of course is why?

This is where you have to slam on your brakes and resist the urge to push harder for compliance.  Instead stop and consider what’s “getting in the way.”

So swallow that scream, let your breath out slowly, know that if you take a few minutes to calm him and find out what’s going on, odds are you can easily re-ignite the “will” or at least win his cooperation if he needs a bit of help today.  Don’t worry, this will not develop into a “bad habit.”  You can let him know that you realize today he needs a bit of assistance, but soon you expect he’ll be raring to go on his own again.

Sometimes however, what looks like a lack of will is actually a lack of skill.

It’s easy to be fooled.   For example, that writing assignment that would take a measly five minutes to complete if your child would just sit down and do it has now turned into a 45-minute tantrum including torn papers and a chair knocked over.  A knee jerk reaction is he’s just being lazy, or blatantly oppositional – just like your brother used to be – ok, still is - but behind those protests may be a hidden fine motor delay making it so draining and exhausting  to complete the task that he really can’t do it. The reality is he wants to do it and even realizes it would please both his teacher and his parents if he did – but he can’t.

Then there is the child that you might swear hates playgrounds, but upon closer observation he’s stumbling and falling.  Struggling to climb, run or jump, or gets dizzy on a swing.  Disinterest is actually masking a gross motor delay.

So how do you know if it’s lack of will or skill?

You don’t without a bit of investigation.

But that doesn’t imply he’s just being difficult.  There is a reason he is in “shut down” on this particular day and it’s not just to make you late for work or to “get you!”

The will is there, it’s just tucked behind the lack of skill.

Sometimes it is difficult to believe, but the reality is that children want to be capable and to please the adults in their lives. When they’re not cooperating it’s important to look for the real fuel source – whether it be will overwhelmed by stress, or a skill not yet developed.  There is always a reason and when you address it you’ll soon gain the cooperation you desire.

Nurturing little ones since 1984!